The number of entrapments and engulfments in grain storage and tanks spiked late in 2019 and early in 2020 following the exceedingly wet 2019 growing season. One of the most common reasons for entrapments is associated with attempting to unload out-of-condition grain. Often, this results in plugged sumps, and occasionally, the grain may even catch fire, prompting entry into the bin under unsafe conditions.

Improper unloading practices actually can impact the integrity of the bin itself. For example, it is important to remove all grain possible through the center sump first, then use intermediate sumps for removing whatever grain remains. This results in even pressure all around the tank and safe unloading conditions. (See Figure 1.)

Off-center unloading results in negative pressures inside the tank and deformation of the sidewalls. Eventually, bolts start popping, and the bin collapses.

Tanks with sidedraw spouts need to be designed properly with flume systems, so grain can be top-down unloaded, so the internal pressure remains positive during unloading. 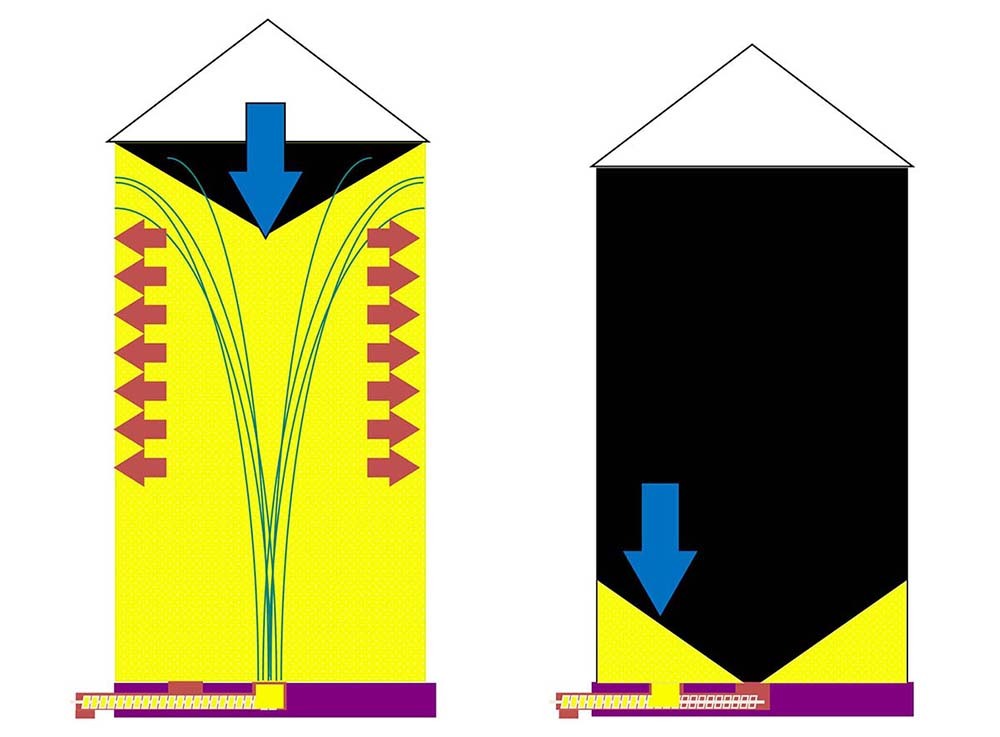 With so many entrapments associated with attempting to unplug a sump, it’s important to know safe ways to get the job done. Here are some techniques to use, either by themselves or in combination:

• In years when grain condition is less than ideal, empty the grain from the tank and reload it into the tank before it goes out of condition. This may need to be repeated more than once during storage. Check the grain frequently during storage and while unloading, without entering the tank.

• Wait two or three days, if possible. The grain may loosen up to flow on its own from the vibration generated by normal elevator operations.

• Turn on the aeration fans.

• Open and close the plugged sump several times to try to dislodge the blockage.

• Rod the grain loose from the safety of the tunnel beneath the tank. It’s important to include some type of port or hatch that can be opened in the spout beneath the sump for this purpose when designing a new tank.

In years when grain condition is less than ideal, empty the grain from the tank and reload it into the tank before it goes out of condition. This may need to be repeated more than once during storage. 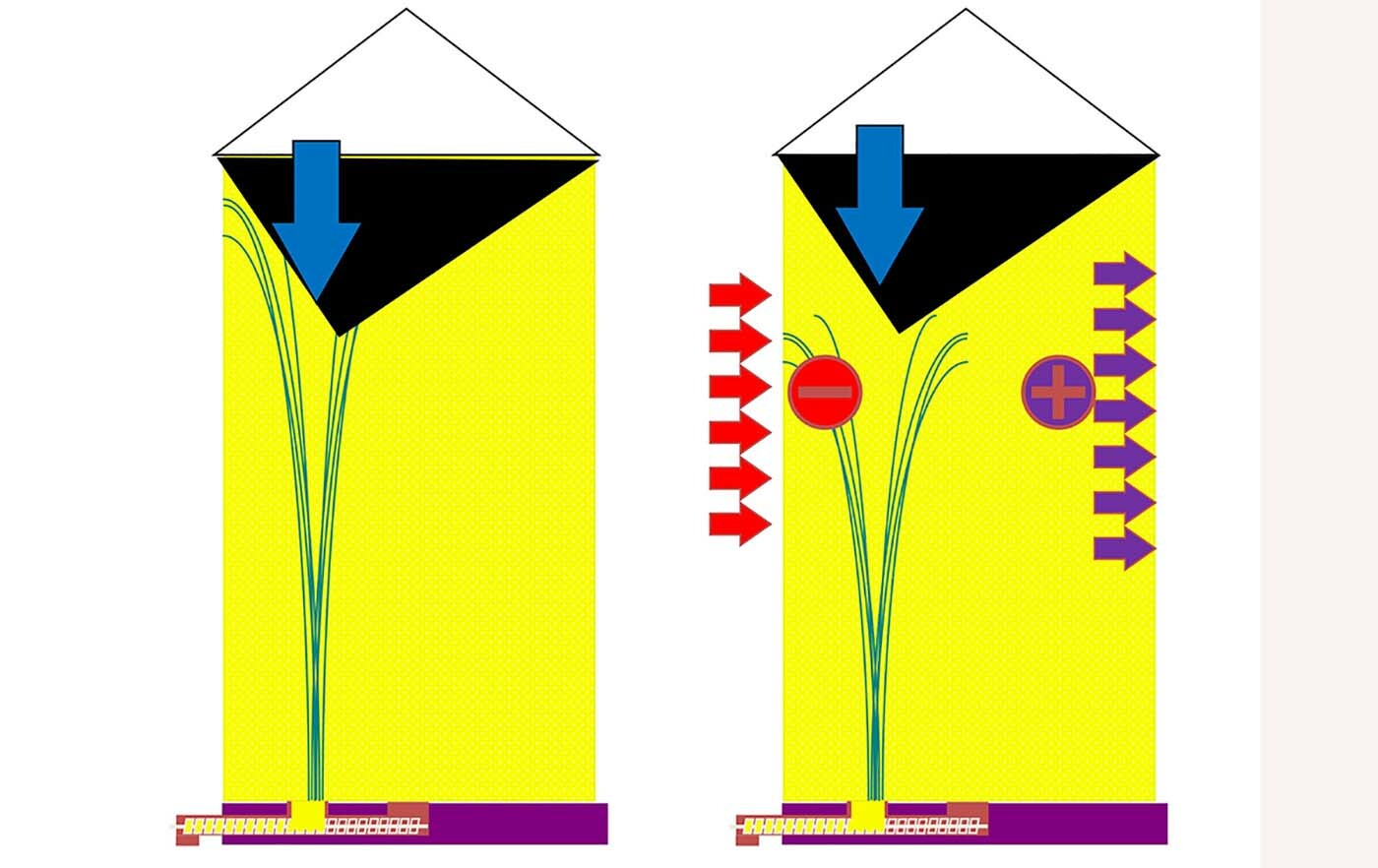 Off-center unloading through an intermediate sump places uneven stresses on the silo walls and can lead to bin failure. Illustration courtesy of Decker Consulting & Investigations, Inc.

• Where no tunnel is available and all other non-entry options have been exhausted, there may be no choice but to enter the tank. In that case, it is essential to follow all grain bin entry procedures, including locking out and tagging all tank equipment, wearing a full-body harness with properly rigged and anchored Lifeline System, and having a trained observer present.

• Use an extendible utility pole to reach and knock down grain from a side or overhead opening to the tank.

• Use a grain vac for cleanout. To do this safely, perform lockout/tagout on tank equipment and remain in constant communication with the grain vac operator. Never vacuum from below the level of any operator in the tank or from beneath his or her feet. The tank should be assessed for hazards and personal protective equipment (PPE) that may be required for an operator.

• Use a compressed air supply to dislodge grain.

• Use a bin whip to break up clumped grain. While no bin entry is required, in most cases, this requires hiring a professional service to do it. The tank should be assessed for potential hazards and PPE needs, because the operation of a bin whip can generate a tremendous amount of dust.

• Sometimes out-of-condition grain clumps in the center of the tank, forming a pyramid shape. The safest way to break this up is from the top of the tank, emptying the loose grain a little at a time, exposing a little of the pyramid at a time to break it up.

Flowing grain is the number one hazard in unplugging a storage tank. It most commonly occurs while trying to unplug a drawoff or “walking down the grain,” a practice now forbidden by OSHA.

Flowing grain is the number one hazard in unplugging a storage tank. It most commonly occurs while trying to unplug a drawoff or “walking down the grain,” a practice now forbidden by OSHA. Frequently, lockout/tagout has not been applied.

Avalanche is another common hazard. It occurs when grain is hung up along the sidewall or in a large pyramid, and someone is trying to break it up.

Grain bin entry safety starts with grain quality management. Inside the bin trying to break up crusted grain is a dangerous place to be. The number one cause of grain engulfments is rodding grain from inside the bin to unplug a sump while the reclaim equipment is running.

The only safe way to rod grain is from outside the tank. This can be accomplished from the reclaim tunnel through an access hatch leading up into the sump. In some cases, a rodding pin consisting of a bent steel rod can be clamped in place from the sump to a point outside the sidewall designed to break up a clump from outside of the tank, eliminating bin entry.

For safety when using compressed air, be sure to use properly rated piping, hoses, and fittings to extend its reach to keep the operator as far away from the “business” end of the hose as possible. Also needed is some type of guarding or PPE to protect the user from dust and flying debris.

Grain vac users also need appropriate PPE and a way to communicate with an observer. The condition of the grain in the tank needs to be assessed before anyone enters. 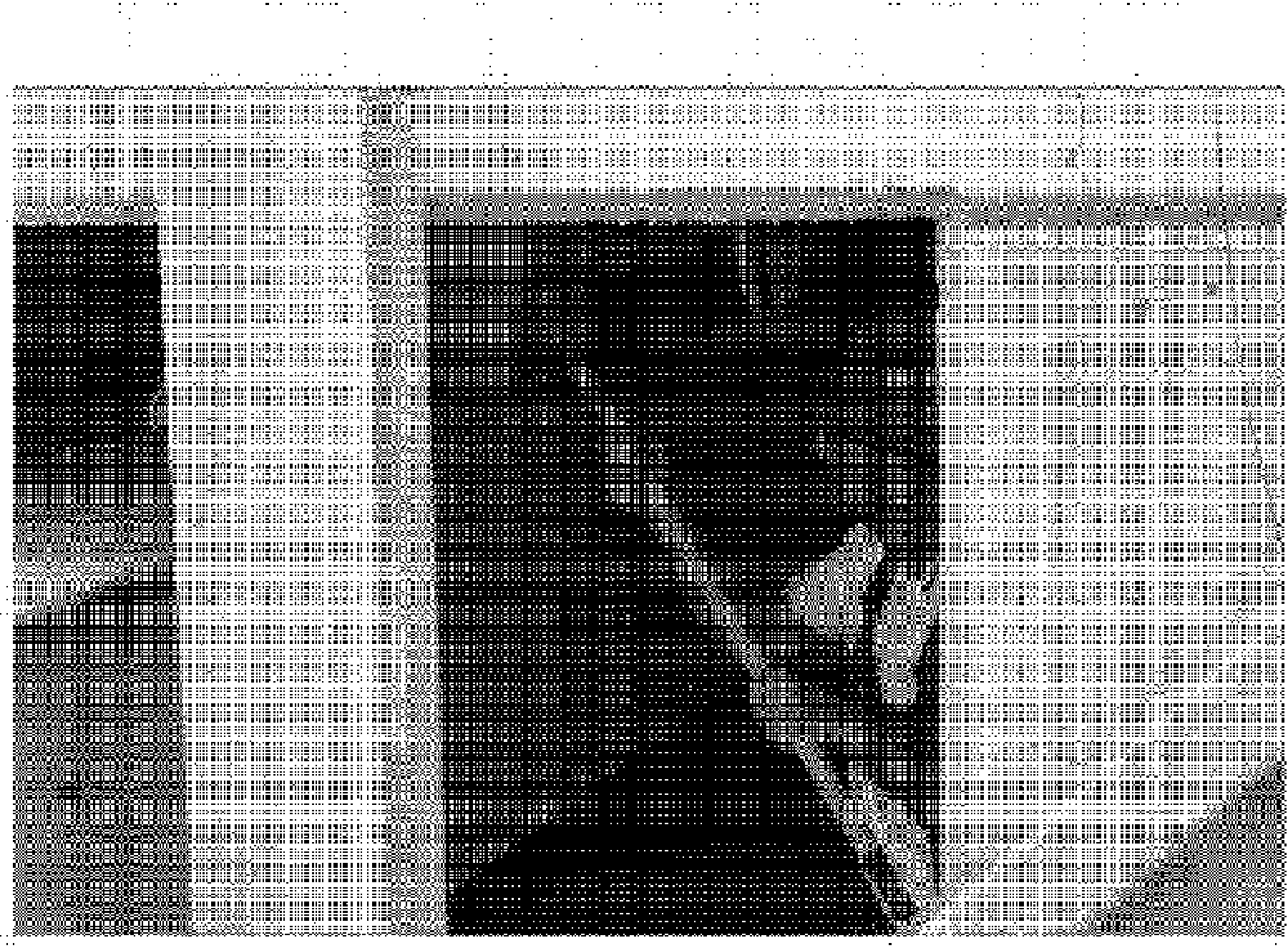 The safe way to break up (rod) grain clumps clogging a sump is from the reclaim tunnel through an access port. Rodding grain from inside the silo is the number one cause of grain engulfments.

One way to unload a tank full of out-of-condition grain is to cut a hole in the sidewall and insert a portable unloading auger. Here are steps to accomplish this task, when the auger is to be located above the floor or foundation:

• Install some reinforcement around the opening, such as an angle ring.

• Cut a round, smooth hole inside the reinforcement.

• Wire up the auger, and run it in order to pull it in farther, if necessary.

Whatever you do to get grain flowing again, take the following hazards into account:

• The potential for an explosion.

• If there is the possibility of grain on fire, don’t unload into the facility’s grain handling equipment. Unload to the outside.

• Analyze the bin structure. Take note of other portions of the elevator surrounding the bin and any attached grain handling equipment.

• Where are utilities and their shutoffs located?

• Can equipment be operated remotely?

Some additional precautions – make sure standard industry safety decals are in place on your storage tanks. These are available from the grain bin manufacturers and their dealers. For a list of decals available, call the Nebraska Grain and Feed Association at 402-476-6174.

This article is based on an April 16 webinar presentation by Jeff Decker, president and CEO of Decker Consulting & Investigations, Inc., Lerna, IL (217-259-5325). Decker is also the president of the Grain Handling Safety Coalition, Springfield, IL (217-787-2417). To view the webinar, go to grainnet.com/standup.